I've had some new visitors to my garden, a large flock of Waxwings. I've never seen this particular bird before and was curious by their rather exotic appearance, especially the rather fancy crest on top of their head. They descended onto the Cottoneaster bushes at the foot of the garden, only resting for a few moments whilst they greedily gobbled up the bright red ripe berries, before alighting in a rather startled fashion to visit other bushes in a garden further up the road.

I made a quick mental note of their features and went in search on the RSPB website, and eventually managed to identify them as Waxwings, a bird that breeds in the remote taiga forests of Scandinavia. They usually visit Europe in the winter when their breeding ground becomes overcrowded, resulting in a shortage of food which forces them further afield. If berries are in short supply either due to poor crops that year or because the berries have already been eaten by other hungry birds, they can come as far as Britain in search of food. But they usually only come as far as the east coast, from Scotland down to East Anglia.

I'm in Lancashire in the north west, which would account for me never having seen them before. Further research would suggest many sightings of large flocks of these beautiful birds are being seen further inland in many parts of the country.

Here is a rather poor photo I managed to get whilst they rested in the Cottoneaster. It's a pity I couldn't get a close up to show their beautiful colouring, but every attempt to get closer made them fly away. 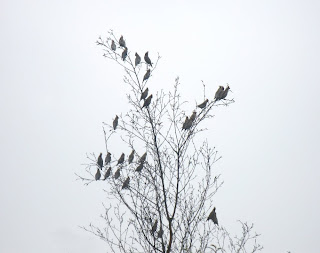 Here they are taking flight. 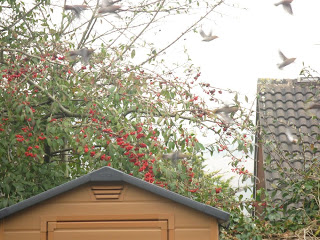