The Good the Bad and the Beautiful

It's been a week of contrasts...

A few days ago whilst out on my morning walk with my dog, I offered to help a distressed rider who had slipped off her horse when it lost it's footing as they slowed from a canter to a trot. She was in extreme pain as she'd twisted as she'd slipped off and hurt her back. I felt she needed an ambulance but she insisted she would be OK in the car. So while her friends took her horse back to the stable yard I took her to hospital. I mention this only to draw a contrast with another incident the following day.

Thankfully there was no serious damage, it was just badly bruised. She couldn't thank me enough for helping her, but it was the least I could do and I would hope someone would assist me if I ever needed help.

What I did wasn't anything much really, yet it left me feeling really good for the rest of the day. I don't think I'm alone in experiencing a very gratifying feeling in offering to help someone in difficulty, I'm sure most people do. We don't consciously set out to help for selfish reasons, but there is definitely a reward in being nice to others. Doing something to help, especially without being asked just gives a lovely warm feeling.

The next morning I woke to find my garden shed had been broken into during the night and my son's mountain bike had been stolen. We both felt violated. It wasn't a nice feeling knowing someone had been creeping around in the back garden as we slept. Even though my son hadn't used the bike for a couple of years, it was still a horrible feeling. I imagine the person who stole it felt a similar gratifying feeling and warm glow as he saw the bike and seized it, just as I had felt when I helped a stranger the previous day.

My garden doesn't quite feel right now. It used to be my little private oasis where I would sit out as it was going dusk, glass of wine in hand, listening to the evening birdsong. Now I feel uneasy, my eyes scanning the shadows for intruders.

I don't feel angry, I just feel sad that someone chooses to spend their time sneaking about people's gardens in the dead of night stealing their belongings. There are far better ways of feeling good.

So, that's the good and the bad of life.... and now to something beautiful...

I found this feather whilst out on my walk yesterday. Isn't it striking! A little research leads me to believe it's from a Woodpecker. 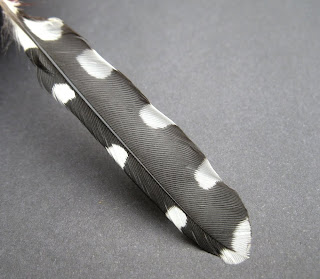 I wish I could find more, I could use them in some of my designs. Polka dots are very fashionable!

This morning's walk revealed a four leaf clover nestling in a clump at my feet. I just looked down, and there it was! 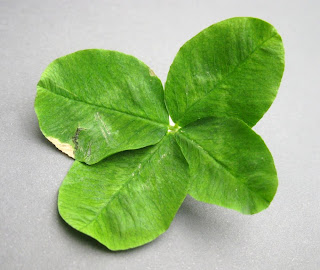 It isn't the first time I've chanced upon one. But every time has been just like that... glance down and there it is! The times I've searched and searched I never see one... maybe they find us! :)
Posted by Mel's Mixed Media at 04:57