It's been a mixed day weather-wise. It started out really quite chilly, almost as if it was autumn, and I walked Bailey with my fleece on. No Bailey didn't have my fleece on, I did! Bailey's got his own fleece. We went to the woods... not so many flies about as there has been of late, so for once I enjoyed a walk without getting bitten by horseflies! I've lost count of how many bites I've had this past week while it's been really hot and humid, and they don't half itch!

By mid morning when I had a hospital appointment, the weather had brightened and the sun came out to play.... just because I'd decided to wear black, so I looked really over-dressed! Well, I wasn't over-dressed for long, because I hadn't been at hospital 2 minutes before I was told to get undressed!

Then as I was driving home this afternoon the sky suddenly darkened dramatically. It looked like the end of the world was nigh. For a second there, I was in two minds whether to switch the radio on to hear if someone had pushed the button! On reaching home I was just going to run inside and grab my camera when my friendly neighbour called me over for a chat. Reluctantly I exchanged a few pleasantries, as you do, then blurted out "sorry can't stop I want to take a photo of the sky".

She must have thought I'd lost the plot as I hurried away casting my eyes heavenward! Anyway, through the front door, I grabbed my camera and sprinted upstairs (believe that and you'll believe anything!) and I managed to get this photo from my son's window (after scaling a mountain of clothes on his bedroom floor)! But it's not nearly as dramatic as it had been on the drive home. 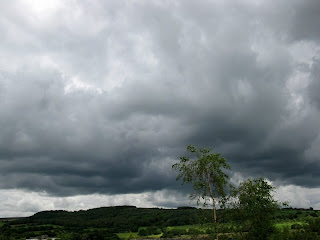 I've had an evening of experimenting with various new materials and techniques. I've been working with copper wire and decided to try my hand at oxidizing it. I'd read somewhere that Rock Sulphur from the pet shop (used in dog's drinking water to supposedly cool the blood in hot weather) has the same effect as very toxic Liver of Sulphur, when oxidizing metal. Personally, I wouldn't add anything to my dog's drinking water, but please don't confuse Rock Sulphur and Liver of Sulphur, they are two entirely different things. Liver of Sulphur can be very toxic and you mustn't even breath the fumes, so NEVER ADD IT TO DRINKING WATER, YOURS OR THE DOG'S!

Anyway, I digress. I wanted to see if there was sufficient strength of sulphur in the Rock Sulphur to oxidize copper, but alas it didn't work! So tonight I tried the environmentally friendly method of using a hard boiled egg. I boiled the egg for about 20 minutes, and whilst it was still hot and with the shell on, I put it in a zip lock bag, and smashed it up with a rolling pin... after first making sure I hadn't yet added the earrings! Then I popped the earrings inside, rolled it up to expel any air and sealed it. 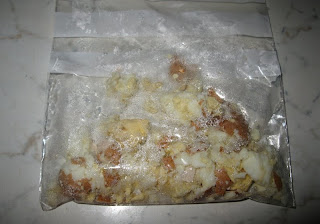 It's my first attempt at making hoop earrings. I fashioned the hoops on a wooden dowel... I actually used the wooden spindle on my kitchen roll holder, but any cylindrical household object would do. 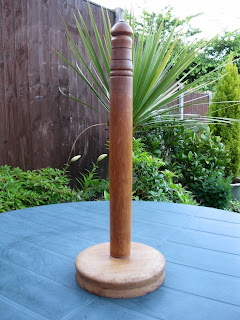 Making the hoops was quite simple. I cut a length of 22 gauge wire, filed the ends smooth, then made a small loop at one end with round nosed pliers. After wrapping the wire around the dowel to form the hoops I slid them off and hammered them to work harden the wire. I don't have a nylon hammer, so I improvised by placing the hoops on the bench block and covering them with an old plastic transparent Tupperwear lid, then hit them with a hammer. Needless to say I won't be using the lid on my butty box anymore, 'cos it's a bit battered!

Not content with plain oxidized copper hoops, I embellished them with beads interspersed with tightly coiled copper in 26 gauge. This was the fiddly bit... threading the beads on was plain sailing, but wrapping the wire around the hoops made them lose their shape and the hoops were really difficult to re shape with the beads on. So I slid all the beads and copper coils off, straightened the wire with nylon jawed pliers, re did the loop fastener and re-fashioned the hoops on the dowel, and then very carefully threaded the beads and coils back onto the hoops. I then tweaked the straight end with flat nosed pliers to make a small hook to push through the loop to secure them.

The oxidizing worked quite well, and because I placed the hoops in the bag whilst the egg was still very hot, it only took about half an hour to turn them dark. But then I had to wash the eggy mess off the earrings, and polish them up which removed most of the oxidization, which kinda defeated the object. But they're still gently oxidized and less bright than they originally were. If you want a darker finish, leave them for longer, perhaps overnight 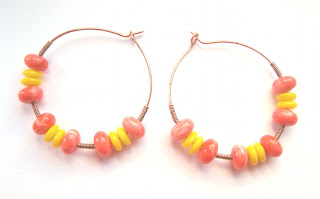 It's not a very good photo, you'll need to click to enlarge it in order to see the coils, but it's the best I could do at this time of night. As experiments go, the hoops aren't too bad, but they're way below the standard for selling, so I'm keeping them for myself and will keep experimenting and practicing until I'm satisfied with the result.

Oh, almost forgot to mention... I ordered some lovely vintage buttons. Watch this space!
Posted by Mel's Mixed Media at 12:43